The preceding video was shared with CPS in March of 2014.

Darla was a young vibrant dog. Her owner gave her a toy, purchased from the local Walmart retailer. Unfortunately, the toy manufacturer used a woven nylon fabric (prone to unraveling). As the dog chewed the toy, the owner noticed the toy was not holding up well and immediately took it away and discarded the toy. It wasn’t until a day later that the dog started to show signs of distress. Unbeknown to the owner, while the dog was chewing on the toy, the nylon fabric had unraveled into one long string, and the unraveled string wrapped around Darla’s tongue and she had swallowed some of the unraveled fabric.

Because nylon does not degrade in the digestive tract, the string continued to tighten as it processed through the dog’s digestive system, yet remained connected around the tongue. Eventually the nylon string cut through the intestinal tract and peritonitis set in. After her first surgery, Darla had to undergo a second surgery, however succumbed from the damage inflicted by the unraveled undigestible fabric. 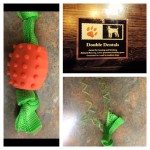 It is important for pet owners to know that problematic pet products are not subject to recalls.  Although the image on the retailer website for the Double Dentals Dog Toy shows what looks to be a cotton rope toy – the disclaimer on their website states: “Product availability, styles, promotions and prices may vary between stores and online.” The product – of the same name – was sold, but made with an undigestible fabric.  Without standards in effect, pet owners should know that materials substitution is within the rights of the manufacturer. Manufacturers do not need to test dog toys for safety. There are no safety standards in place for dog toys.

It is also important to know that even though Darla succumbed to injuries caused by this toy, her owner must pay the vet bills.   While legal remedy is an option, it is the burden of the consumer to prove that the pet product injured or killed her pet. Basically, without legal remedy, the manufacturer will NOT be held accountable for the dog’s death.

Pet product manufacturers should pay close attention to the materials used or substituted by their manufacturing agent. Why was an undigestible, unraveling fabric allowed as part of a toy designated for chewing, likely to wind up in the digestive tract of a dog and stated on the Walmart website as: Great for tossing and fetching, Natural flossing action for healthy gums, Intended for small to medium dogs? We will never know. However, in the interest in the health, safety and wellbeing of your pet, CPS suggests that those pet owners who have purchased the Double Dentals Dog Toy (as shown in the video above), return it to Walmart and demand a full refund.