In 2015 Center for Pet Safety conducted a pet seat pilot study to determine general crash performance of these popular travel tools for the small dog. A pet travel seat is a portable seat for a companion animal that is typically used in a car to hold or elevate the pet, however it does not offer full containment. Various styles include booster seats, console booster seats and “crash tested” pet travel seats.

Click here for the summary report from the Pet Travel Seat Pilot Study.

Test Results:
The PupSaver rotated upon impact and the pet seat rolled onto its side. One anchor strap released due to a plastic buckle failure and the product sustained some tearing. The 30 lb. test dog remained connected via the collar and PupSaver Tether system.

The test dog in this test was ideally positioned, directly in line with the shoulder belt. This allowed the shoulder belt to carry the majority of the restraining forces because the dog was being loaded near its center of gravity.

If the dog was in other positions (moved laterally in either direction or laying down), the shoulder belt would not be directly loaded by the dog, and the restraining forces would be carried by the connection points on the PupSaver. Even with the ideal loading condition in this test, one of the lap belt connectors failed in the test.

In other dog seating positions, which result in more significant movement of the dog, the collar or walking harness would be loaded, and these are not designed for crash protection.

PupSaver instructions recommend that it be used in the front seat. This is not the safest location in the car for your pet, exposing them to a) airbag deployment, and b) occupant compartment intrusion in frontal crashes.

Test Results:
The Snoozer Lookout Car Seat was secured to the test bench. The 25 lb. Terrier Test Dog was secured (per manufacturer instructions) to the seatbelt system using the anchor strap included with the Snoozer Lookout Car Seat. The anchor strap was connected to a new walking harness. (Manufacturer does not specify the type of harness to use for travel, but only instructs the user not to connect to the dog’s collar.) 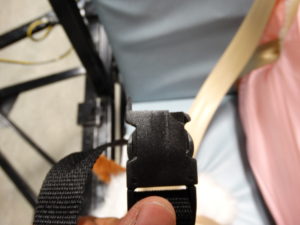 Test Results:
The PetSmart Top Paw Booster Seat was secured to the test bench. The 30 lb. Terrier Test Dog was secured (per manufacturer instructions) to the anchor strap included with the PetSmart Top Paw Booster Seat. The anchor strap was connected to a new collar purchased from the retailer. (Image on the product box shows dog connected to the booster seat by the collar.)

Upon impact the wire connection hardware experienced significant deformation. At the time of impact the test dog was fully unrestrained. The Booster Seat remained fully restrained on the test bench. (Note: This product is likely a Private Label of Solvit Booster Seat – See Summary Report Appendix for more information)