Every mission starts with an inspiration.  Maggie was ours.  As the Center for Pet Safety mission continues to grow and evolve, we pause to remember why this organization was started.  Back then, we had a vision of what CPS would work to accomplish. Over time, we’ve seen that vision grow and evolve to heights we could never have imagined in our infancy.  We look forward a long future of faithfully serving pet owners around the globe and working to ensure the safety of their companion animals. 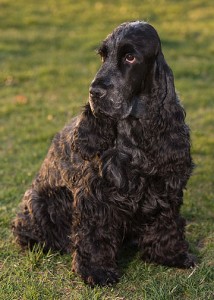 Once I started the engine, Maggie wandered from place to place in my car while I was driving. A blue roan English Cocker Spaniel, Maggie was the new addition to my family.  Maggie’s litter mate Spencer, and my older dog Bailey were unaware that they were going to have a new sister.

She needed to be rescued from an abusive situation. Maggie arrived at 2:00 am at Dulles Airport on Memorial Day Weekend 2004 and needed some special attention. She was so stressed that her fur was falling out and she had several bare patches of skin. When she arrived, Maggie was nervous and shaking, but once she saw her brother Spencer, she recognized him instantly and I knew she was where she needed to be.

Once she settled in, we began to introduce a new daily routine – the car ride to my mother’s house. Having two other spaniels there was no room in my car for another crate. Maggie made her way from the back seat to the front seat and finally settled behind me to lay down.  I was always trying to find where she was in the vehicle  – it seemed like a constant game of hide and seek. My eyes needed to focus more on the road, this situation wasn’t safe. I needed to find something to keep her in one place in the car.  I also envisioned her flying through the windshield if we were in an accident, the thought frightened me.

A new big box pet store was added to the strip mall in my neighborhood so I shopped the travel section. Upon spotting a safety harness, I pulled it off of the peg and read through the instructions. The documentation indicated it would keep her from being a distraction while driving and protect her in the case of an accident. Bingo! Just what I was looking for. I bought Maggie her safety harness and fit it to her when I got home. We went for a test drive and she stayed in place. It did what it was supposed to do and I felt better that she was now safe during car rides. A few months later, that safety harness was put to the test.

I thought I bought a reliable safety harness for my dog Maggie. I was driving Virginia I-66 during the morning rush hour. A car cut in front of me and I had to slam on the brakes. Maggie was screaming in pain.  I discovered the harness tether had wrapped around her back legs and she was thrown and hit the back of the front seat. She was hurting and scared and I couldn’t get to her fast enough.

That safety harness did nothing to protect Maggie.

After Maggie recovered from her injuries, I set out to find a product that would work better for us. To my dismay, I found out that there were no safety standards or required testing for pet products. I also discovered that the Consumer Products Safety Commission does not consider pet products “consumer products” and they turned a blind eye to the marketing claims and pet product safety.

If no one was monitoring product quality, how could I trust what I was buying would protect her?

I simply couldn’t believe that no one was watching out for her. I must be missing something. Safety harnesses should keep Maggie safe in an accident – so I decided to purchase 12 different harness products and take a closer look. Maybe I just bought the wrong product for her – it was my fault she was hurt. I decided the only way to know for sure was to formally test a few harnesses, so I called a research facility and spoke with them about crash testing.

To my delight their company was building a new test facility within 9 miles of my home. Over the next several months I worked with the engineers to learn more about the testing options. We talked about developing a test dummy to ensure an accurate representation of a dog. What size should he be?  (In the 2010 AKC Popular Breed List 6 of the top ten dog breeds were “large”.)  Data….I needed data.  Data doesn’t lie.  Could we instrument the test dog?

After we had everything ready for the testing, we took the 12 harnesses and lined them up on the conference table. The engineers and I went one by one and selected the ones that looked the strongest. One made claims of  “meets or exceeds” federal crash test standards.  That was the first choice for testing. We selected others that looked strong based on the way the consumer would buy them. In the end we had selected a group of 4 harnesses. Our “control group”.

Then came the day I had waited months for. Our first crash test. I watched as the engineers fit the first harness to the test dog. They put him up on the test sled and strapped him in place. We moved to the observation platform.  The engineers made their final preparation and took photographs of the harness on our dog. The overhead lights came on – as bright as daylight.  The alarm sounded seven times and what sounded like an explosion forced the sled backward – to simulate a front end collision. It was shocking.

Even though he wasn’t real, our test dog looked real and I lived through Maggie’s experience all over again. I remembered her screaming in pain. I was in tears. We watched the replay of the video – it was horrific. After I regained composure we tested the next one. It was awful. Reliving Maggie’s experience over and over. Again, the alarm sounded, and the explosion.  The engineers went down the steps to document the outcome of the test. I waited with baited breath to hear about the outcome. The lead engineer, Steve, came up the steps and had a strange look on his face. “Multi-point failure, the harness failed to retain the dog.” “That would have killed my dog.”  I sobbed. As he turned the corner at the top of the stairs, he turns to look at me…“I think you may be on to something.” he said.

We watched the video in horror. The next harness to be tested, broke at the connection point and our test dog went flying. The next harness, the one that claimed crash testing was up next. The most horrific outcome of all – it decapitated our test dog. I turned to Steve and told him “I need to start a national center to look at pet product safety. This is just wrong. Pet owners have no idea how bad this really is.” “Are you really going to do that?” he asked. “I think I have to.”

The Center for Pet Safety, a non-profit research and consumer advocacy organization was founded in July of 2011.

We invite you to enjoy a tribute to Maggie.