Center for Pet Safety – Protecting Pets and the People Who Love Them.
June 6, 2020 in Pet Loss

It’s the worst part of being a pet owner, yet inevitable for all of us. Pet loss is an especially difficult and sensitive topic to address.

I made the decision to cut back on my workload to ensure they had good care and take the opportunity to spend more time with my dogs.  My experience in caregiving started when I took care of my brother, mom and dad before they died so I know how important that quality time is as end of life approaches.

Trevor’s breathing was unusual. He was only six when he was diagnosed with a heart condition and the treatment seemed to be working well. He was now eight years old, but his breathing was odd this morning. It wasn’t the type of rapid breathing typically associated with heart failure, it seemed more like he was suffering from allergies. His gums started to turn pale, and I rushed him to the ER. I knew in my heart during our trip to the ER that he wasn’t likely to come home with me. While the veterinarian and I discussed whether or not his condition was truly treatable, Trevor crashed. In one way, I was grateful that Trevor made the decision for me – that we didn’t put him through months of tests and treatments that wouldn’t have bought him any quality time. My beautiful Trevor died in October 2019.

Trevor as a puppy.

Rusty’s lymphoma slowly worsened. The oncologist I met with agreed that, in our specific household, chemotherapy wasn’t a good option, so I opted for palliative care for him. Working with our local holistic veterinarian was a dream. Rusty loved the doctor, and enjoyed his acupuncture treatments. At the vet’s suggestion, I engaged a certified canine massage therapist for acupressure to help extend his acupuncture treatments. We followed this protocol until the pandemic made it too risky for all involved to continue. Following the recommended protocol gave us another 24 months together – and countless belly rubs. (He adored his belly rubs!) Eventually though, the pain took hold and Rusty had one very bad night. It wasn’t fair to him, so the day after Memorial Day I said goodbye to my little man. Rusty was only 7 years old. 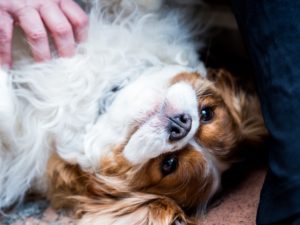 Rusty getting a belly rub.

Suddenly the house seemed so quiet. After months of managing a household of sick dogs, I was down to one aging dog and one healthy dog who was mourning the loss of his best friend. Over the next few weeks, Spencer started waking at night. Sometimes he would pant uncontrollably. He would jump off of the bed, run down the stairs (sometimes belly flopping off of the last two stairs) and had to go outside immediately.

At that point the household rules changed, Spencer wasn’t allowed upstairs and I started sleeping on the couch. He’d wake up at 1 or 2 or 3 AM, paced until he relieved himself outside and then woke me up again at 5:00 AM and 6:00 AM. The sleep deprivation was awful, but as long as he had a good quality of life, his comfort was my first priority. Everyday I would sit on the floor and he would still come up to me, tail wagging, for his hugs.

Eventually though, he became incontinent and required diapers. He had developed nerve compression in his lower spine (controlled somewhat by medications), but the diapers were uncomfortable for him. His ear infections grew worse and while the vet recommended ear ablation surgeries for both ears, Spencer was a bleeder. At almost sixteen years of age, surgery was simply too risky.

His panting grew worse, so I knew the pain was increasing but he was already on the maximum doses of pain killers he could have. He was in pain, he was infected and he was starting to fall – his body was simply failing him. After he experienced a particularly bad morning I called the vet and made his final vet appointment. My heart broke on July 21st when I had to say goodbye. 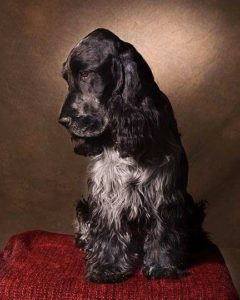 Spencer at age 3. The most beautiful soul I’ve ever known.

When we first bring home a new pet, our commitment to them is lifelong. They bring so much joy and love into our lives. As pet owners we should strive to be present for them during their time with us and spend as much quality time with them as possible.  I have gained a new perspective from these experiences over the last ten months that I hope to share with you once the sadness passes.