Center for Pet Safety – Protecting Pets and the People Who Love Them.
May 19, 2015 in Disaster Preparedness, Pet Safety

Let Us Not Forget the Military Dogs Who Bravely Served

On Memorial Day, we remember those brave men and women who have given their lives for our country. Let us also salute the courageous Military Dogs who have perished in the line of duty. 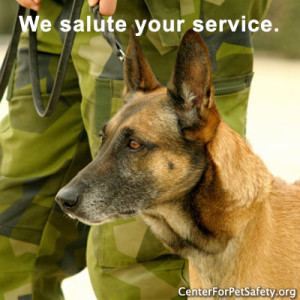 An active part of the military since before the formation of the United States, these incredible animals have worked alongside our brave soldiers.

It is said that Benjamin Franklin and Spanish conquistadores encouraged the use of dogs to confound Native American enemies. In 1835, the U.S. Military used dogs during the Second Seminole war in Florida. Dogs were used to guard soldiers during the Civil War. In the World Wars, dogs were used as messengers or to assist in finding enemy positions. An estimated 4, 000 dogs were used during the Vietnam War to lead patrols into the jungle. During the height of the wars in Iraq and Afghanistan, the nearly 2,500 dogs on duty saved countless lives using their keen sense of smell to discover planted IEDs (improvised explosive devices).

They are the often overlooked Military Working Dogs. In Vietnam, most of the animals were left behind. With the Iraq and Afghanistan wars, many of them are being recognized as heroes.

These dogs go through extensive training to assist our military with efficiently executing their missions. The dogs are partnered with a military handler and take on active roles, expertly assisting personnel with duties such as explosives detection, sentry and capturing the enemy. The dogs are seen as vital to their handler as a weapon. Their relationship must be professional, where the handler is the alpha. The dog’s life is in their hands and, as well, the reverse is true.

The dogs also provide sensory support (eyes, ears and nose) for the troops. With their sense of smell being ten times more powerful than a human, these dogs are able to detect trace amounts that would otherwise go unnoticed and improve the overall performance of their military mission.

Military working dogs also provide comfort to our troops. The working dogs not only aid troops with their mission, but the dogs are family. Providing a refuge from the stress of war, the dogs look forward to their game of fetch and help bring normalcy to an otherwise abnormal existence for military members who find themselves far from home.

So this Memorial Day – as we remember the brave men and women who died in service to our country – let us also remember the Military Working Dogs who died in action, protected the troops and added to their lives. We salute you.

To learn more about Military Working Dogs, go to:  http://www.defense.gov/home/features/2006/Working-Dogs/index.html